Long-gone are the halcyon, back to school days where the biggest worry was if last year’s pencil sharpener would still work. Today’s parents now have to choose between the sex-ed of the kama sutra or the Kardashians; whether or not they dare toss a Twinkie in a lunch box and whether or not their daughters are dressed provocatively enough. A school in Noble OK, (home of the Noble Bears), discovered the hard way that enforcing a dress-code in the era of the skin-tight yoga pant is an uphill battle that must be fought… against the parents.

HERE’S YOUR FREE AUDIO PREVIEW OF THIS CHURCH DOCTRINE

[/private]You see a school like Noble can publish all the dress codes it wants but without the parents around to acknowledge and then help enforce the code it’s meaningless. Superintendent Ronda Bass noticed on the first day back that many girls were wearing micro-skirts that barely covered the upper thigh. Bass called the girls into a school-wide meeting and explained her rejection of these kind of skirts which she says injure the “classy lady Bears” image. One student claims that Bass said she didn’t want any “skanks” at Noble with their “butts hanging out of their shorts.” When the dress persisted the next day, some girls were sent home. This was greeted with howls from some parents and that is the rule not the exception. When in 2012 a New Jersey 7th grader was cited for wearing  short-shorts to school, her blogging mother took to the pages of slate.com to protest the “prudity” and even coaxed her daughter into talking a “selfie” that read “I have legs, why is that such a surprise?”

Well, it’s no surprise you have legs, Rebecca, but it is a surprise that your mother and millions like her think the rest of the planet’s males need to see most of them. 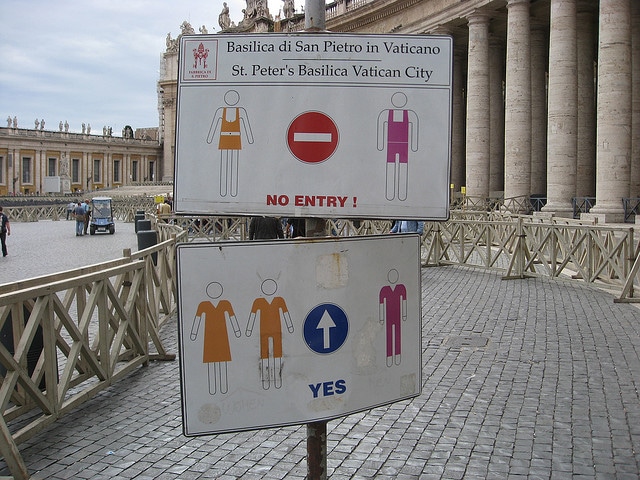 Mass Is A Problem When Men Don’t Respect Their Attire