My Confession Of Failing At Fatherhood

Mike:  Today is 23 January 2015.  Eighteen years ago on this day, I was in Rex Hospital in Raleigh, North Carolina and was holding the then-six-hour-old young Reagan Marie Church, who was born on this day with her twin sister, Madison May Church.  Today is their 18th birthday.  They become adults today.  Those of you that have been listening to this program since it debuted on Sirius in March of 2003 know that the girls have been a part of all the productions that I have made.  Madison has been in all of them.  Reagan has been in all but one.  They have been infrequent guests here on this show.  As a matter of fact, there are still some What Lincoln Killed: Episode I marquee-sized movie posters, because they were both in it, that they signed back in the summer of 2011 when What Lincoln Killed came out that were never snapped up.  I think they’re in the Founders Tradin’ Post.

So the six-hour-old little baby Reagan Marie and I watched the sun come up.  Maddie was being attended to by the nurse.  I can’t recall exactly what it was, something with her eyes, as I remember.  That is what I remember of my twin girls being born on this day.  Please, keep them in your

prayers and wish them a happy birthday.  I have some embarrassing photos that I found of them in my iPhoto collection that I’m going to post on the website at MikeChurch.com.  There are some embarrassing photos of me, too.  I don’t know if I’ll put them on the fan page.  I’ll just put them on the family page.  If you’re looking for me, Frederick Michael Augustine Mary is what I go by on Facebook.

For 18 years, I have been charged with the task of parenting.  I’m not breaking any news or starting any new trends here by saying that almost all of you adults listening have also been charged with the task, some of you may be in your 18th month of parenting, some of you may be in your 36th year of parenting.  We have all accepted the responsibility of the task of parenting.  Let me say to you that in one regard — and I only say this out of love for all of you and your children and your children’s souls — that for much of the 18 years, I’m not going to say I got everything wrong, but I got many things wrong, incorrect.  We all have lamentations about what we could have done differently.  I shouldn’t have yelled at her this time, shouldn’t have done this, etc., etc.  That’s not what I’m talking about.

I failed in my task that was accorded to me by Almighty God, and that task was — this is what I say to fathers often when we talk about these issues on the show — my task was to get those children’s souls to Heaven.  When you go to a Catholic church or Catholic Mass and someone is saying the sacred rights, he is known to you as father.  There’s a reason for that; it’s similar.  Fathers, our job, the most important job we have is not the one that buys flat-panel televisions and loaves of bread.  The most important job we have is the one that gets those souls to Heaven.  It’s also the job of getting your wife to Heaven.  This is the job of the father.  The father must be the philosopher.  The father must be the priest of the family.  The father must be the king.  Just as we are obedient to God the Father — why do you do that, Mike?  Because God said so.  It’s pretty simple.  Hey, Reagan, why do you do that?  Because my dad said so. Folks, I did not take this seriously until about two and a half years ago.  I lament that.  From me to you, take it seriously.  Take the shepherding and the task that is yours to get those souls to Heaven as their life depends on it, because it does.  Be the king of the house, gentlemen.  Be the priest of the house.  Get the rosary out.  Say it with them.  Teach them the prayer.  Teach them the reverence.  Teach them the faith.  Don’t let them make their own decisions.  As liberals tell us and as far too many Catholics and other Christians tell us: I let them make their own decisions.  No, you’re not making your own decision.  That’s the mistake.  From Dr. Spock going all the way back to public school John Dewey, going all the way back to the last century, and going all the way back to the 16th century, you can choose.  No, you can’t.  There is no choice, not when you’re a child, not when you’re in my charge.

My public confession per St. Augustine, I botched it.  I’m trying to make amends and trying now to set it correct, which is maybe why some of you keep observing, [mocking] “Why are you doing all this?  Your show used to be good but now you’re on this Christianity and all this other stuff.  I’m only tuning in for patriotism.”  Yeah, right, because that’s really important.  The eternity that we all face is not important.  Who controls the House of Representatives, that’s important.  No, the proper order is — gentlemen, keep your eyes focused on that narrow sliver of a gate.

In the Gospel of St. John, we learned, when that man came up to him and said: Lord, do many people get into your Kingdom?  I’m paraphrasing because I don’t have it here in front of me.  Jesum Christum answered him: I say unto you, many choose the wide and narrow road; few choose to strive — he said strive.  I looked it up in Latin.  The word is correct.  St. John said strive — strive to enter through the narrow gate.  Striving, that implies works.  It doesn’t imply it, it orders works.  Gentlemen, fathers, that means we have to work at it.  There are times that are tough, times that are great, times that will make you despondent, times that will make you filled with joy, times when your temper will be tested, times when you will be as sanguine as you have ever been.  At all times, strive, strive, strive.  That’s the job God has accorded us in this miserable life.  Gentlemen, husbands, and fathers, don’t lament as I do.  Take it seriously.  If you believe yourself to be in error, change your way today.  Don’t wait until they’re 18.  Don’t wait until they’re 16.  Change your way today.  Even if they’re 36, 46, it’s never too late.  It is never too late.  This is the task.

God accords man and wife, husband and wife the most awesome power He has blessed this universe with, and that is the power to furnish a body for the beautiful, immortal soul that he hath created to go inside it.  Honor it and He will honor you.  Shepherd it and He will help you be shepherded.  Deny it and He will deny you.  He won’t neglect you because lost sheep are always called too.  Christ told us this in the parable of the 99 sheep.  This is not the way to go, gentlemen.

The fashion magazines should not be your reflection of what you think your daughter should look like, or how your son should dress.  They should always be as modest as you would imagine — if you were to meet the Blessed Virgin Mary today, how do you think she would be dressed?  Would she come at you in a miniskirt with leather boots, low-cut, V-neck top, shoulders exposed, all that stuff?  Would she?  How would the Blessed Virgin, the most pure creation of God in the human race ever, how would she appear?  That’s the model.  We look at Mary and we look at her all wrong.  That’s the model.

Ladies and gentlemen, pray for me and my family as I pray for yours every day, I beg of you.  And please take this job, the most important job, seriously, as serious as anything you will ever do, because it is second to none.  Those that lead souls into sin commit sin.  Not teaching our children how to pass through that narrow gate, thus, is sinful.  I love each and every one of you as I love those baby girls.  I don’t want you, because someone had the chance to tell you and maybe inspire you or maybe have you think about it, that the way is narrow, the task is arduous, but the task is ours and it cannot be denied.  Happy birthday, girls.  Daddy loves you. 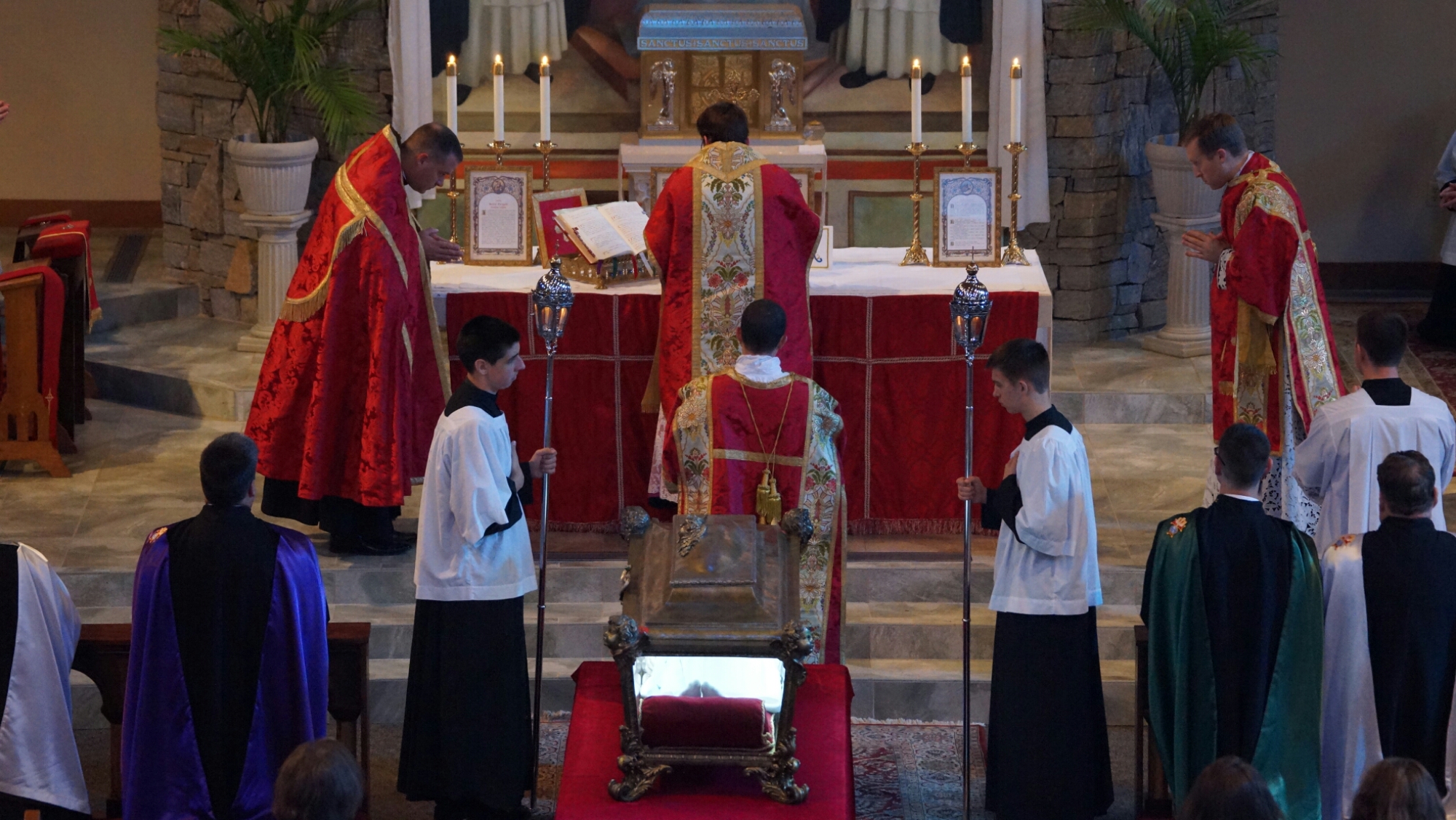