The Pennsylvania #GrandJuryReport removes any doubt over the principle reason pederasts and homosexuals flocked to the priesthood: they knew the “respect” for they & their #Bishop “offices”, laity slavishly observe, would shield them. #CatholicMeToo #mercy https://t.co/jTYhz8Nb3r

We must make prayerful reparations and mortifications for the criminal class; pray for God’s mercy on their souls; pray their victims may be blessed with the Grace to know the criminal prelates and their enablers never sought to become holy men of God…

All the blubbering and crocodile tears being shed online will not do a damned thing towards bringing an end to this DIABOLICAL chapter in the history of not just the Catholic Church, but mankind. Droning on endlessly about the unbreakable shield the laity must erect and observe over criminal prelates because of the inherit respect due their “office” lumps the pederasts and homosexual vow breakers in with the good priests; that’s a scandal they should not suffer – their loving, charitable stewardship of their office has earned them that respect. Defend them we shall. No “traditionalist” I know challenges the inherit honor of the Sacrament of religious orders because they are divinely inspired; not so the men who take vows they don’t mean and then in a perfunctory manner, micturate upon them. The office itself is not in question, the reverence due the pederast or active homosexual scandalously occupying it? No.

We must make prayerful reparations and mortifications for the criminal class; pray for God’s mercy on their souls; pray their victims may be blessed with the Grace to know the criminal prelates and their enablers never sought to become holy men of God but instead to use the naiveté, ignorance and apathy of a largely un-catechized laity to enjoy the protection, fake-respect for their “office”, engenders.

They even got away with claiming that Catholic laity were not to be trusted with their own children and passed outrageous “safe environment training” mandates; Beelzebub himself couldn’t script a greater false flag op (and he did). To the criminal class’s delight, a sycophant laity bought it, hook line and sinker and then used it as yet another club to pound “traditionalists” over the head with for being “too rigid” in their defense of dogma, doctrine, Church Fathers and doctors inerrant teaching and a 1,700 year old liturgy that e.g. gave the Church, nay, the human race, Saint Augustine, Thomas, Clare and Therese.

“Get with the spirit of Vatican II…. Catholics Come Home (from where and to where!?)…. World Youth Day” and every other hackneyed, lame attempt to say what Our Lord said so beautifully: “follow me”, epically failed. That “manna” and the fetid liturgy that served it up fed neither the Sodomite Sacristens (consecration is NOT dependent on their state) nor much of the laity’s souls and to be clear of my point: a Universal Church’s liturgy must feed ALL souls it serves or it can’t be universal.

The only sane, logical conclusion one can draw from the Grand Jury’s confirmation of what many of us already knew to be true is there was an institutional corruption at work here. By institutional, I mean rectory, sacristy and pews. The same crocodile tear shedders today, shed no tears watching 30+ years worth of “ministerial” eucharist abuse; irreverence toward the Holy Sacrifice of The Mass that makes the lead character from the TV show Preacher(a Lutheran) look like St Francis de Sales. Their parents shed tears of joy when they were “liberated” from the tyranny of communion rails, gorgeous high altars and regular acts of mortification and penance. They practically asked to be led by a clergy that didn’t actually believe in the Real Presence or the real-world responsibility of guarding the sacred vows of their “offices” with their very lives if needed.

This horrid, embarrassing epoch puts into real-world perspective the ancient and beautiful adage: lex credendi, lex orandi, lex vivendi. They did NOT believe; they did NOT “pray always”; and they were NOT living lives in a state of Grace or even pursuing them. That was then, they had their turn, this is now. Its time to return the Church of Saint Edith Stein, Saint Padré Pio, Saint Pius X, Saint Therese, Saint Francis, St. Thomas, St Nicholas and St. John the Evangelist et al to reverence and power and apply Her to the modern world.

The world will either follow, or we’ll live to see a McCarrick as Pope after his laity in Rome pass Safe Environment Training. 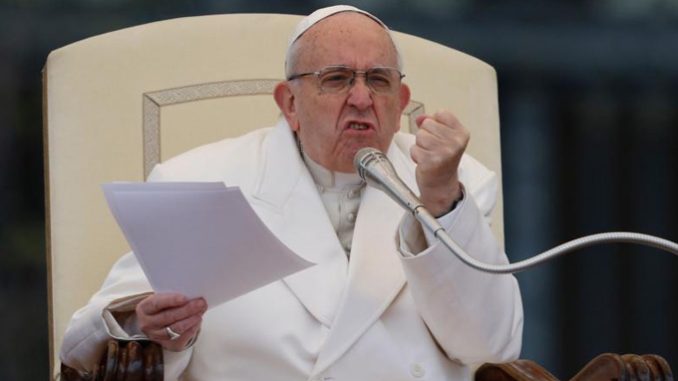