Mandeville, LA – Exclusive Transcript – “Under this concept of federalism, which I live I a perpetual state of amazement that our fellow citizens don’t or won’t get this.  Under the concept that I just explained to you, it is not our border that is being encroached on the Rio Grande.  It’s the border of the sovereign people of the State of Texas.  It’s their border.”  Check out today’s transcript for the rest…

Mike:  Donald in New York is next on the Mike Church Show on the Sirius XM Patriot Channel.

Caller Donald:  They need to protect our borders, and whether that be by defunding their governments that are sending their kids up here, or putting more troops along the borders to send them back where they belong and have them follow the lawful process of entering this country, that’s what the government needs to be doing, not using these kids to advance their political agendas or put people in a panic that we’re being invaded by these dangerous nine-year-olds.  At no point should we ever consider taking arms against children.  That is just against all types of rules of laws or religion or what may be, sir.  That’s it.

Mike:  When I asked him “Even if they’re nine-year-olds?” he said: Yes, they’re invading our country.  They’re violating our border.  This is a question of legality that I’m going to have to explore in a little bit more detail, Donald, but thank you very much for the reputation.  I do not think it was unearned.  The question of legality is, when you say that it is a border, what is actually being breached — just pretend that the border between Texas and Oklahoma, Texas and Louisiana, Texas and New Mexico, and Texas and Arkansas, all of which touch parts of the Texas border, let’s just use that as an example.  Because we are citizens of a union of states and we have agreed to be bound by a written constitution, then we have certain reciprocal arrangements among us.

One of those is that the citizens of the several states, even though we are all citizens of different states — the concept of citizenship of a state seems to have been lost, and there doesn’t seem to be any movement to try to get it back.  Why not?  A citizen of the State of Louisiana, as am I, has to pay Louisiana state sales taxes.  I have to pay a Louisiana apportioned income tax.  I have to pay Louisiana state-apportioned capital gains taxes, business taxes, property taxes, all manner of taxes.  Sometimes there’s an inventory tax if I’m in business.  There are all sorts of taxes that I am required to pay as a citizen of the State of Louisiana.

The only way that Louisiana can enforce that, let’s go back to John Taylor of Caroline.  I’ll try to explain this as simply as possible.  What is sovereignty?  Sovereignty is two things: a will to enact and a power to enforce.  That’s what sovereignty is.  Does the state have a will to enact?  It does.  Does it have the power to enforce?  Does the State of Louisiana have the power to enforce those tax laws on me as a citizen?  The only way they could possibly enforce them against me is if I admitted citizenship.  So what am I a citizen of, the blob of America?  Or am I a citizen of the State of Louisiana, which happens to be a member in a union of states?

Under this concept of federalism, which I live I a perpetual state of amazement that our fellow citizens don’t or won’t get this.  Under the concept that I just explained to you, it is not our border that is being encroached on the Rio Grande.  It’s the border of the sovereign people of the State of Texas.  It’s their border.  [mocking] “Yeah, but Mike, it’s an international border.”  Regardless, it’s also a quasi-international border between Louisiana and Texas, between Oklahoma and Texas.  No one from Texas is going to go to Oklahoma and try to collect a Texas state income tax from a citizen of Oklahoma, unless there has been some case where someone has been accused: You worked in Texas.  You should be paying.  That’s a matter for the courts to decide.  That border is going to act as a buffer.

Why do you think we have extradition policies in between the states?  They used to be necessary.  Someone is caught fleeing, having committed a crime in one state and then the apprehension of them in another state has to be enforced.  Wasn’t this exactly what was at issue when the Fugitive Slave Act was passed?  The idea here that the borders of states don’t matter and that it is a collective border when it’s the  international one, I think, is just a product of the total ignorance of what a system of federalism entails and how you would live under it.  If I’m incorrect, then I’m not paying Louisiana state income taxes anymore.  I’m only paying my federal taxes because I’m a citizen of the blob of America.  That should be very easy, I think, to understand.  Of course, my experience is: Wait till the pushback on this comes.  Next is Mike in New Mexico.  Mike, you live in a border state.  How you doing?

Caller Mike:  Not too bad.  First thing I got to say is: Go LSU!

Caller Mike:  We definitely got to do something about what’s going on down on the border.  The town I live in is about 40,000.  All you see — I’m getting where I see more and more plates out of Mexico on vehicles.  It’s like most of the time anymore most people don’t even speak English in our town.  I have several family members that are ex-police and everything.  Our town is known as one of the major drug hubs for the southeast.  We’ve got to do something about it.  I don’t agree with what that one guy said about shooting the nine-year-olds but we definitely do need to do something about controlling the border because we are having so many problems, even where I live.  I live about 150 miles from the border.  I live in southeastern New Mexico.

Mike:  You have a problem, a very large problem in New Mexico, and that is that the New Mexico State Constitution basically surrendered — I’m not even sure that New Mexico is an actual state after having read your constitution.  So that remains, to me, to be seen.  [mocking] “Mike, what are you talking about?”  Go download a copy of the New Mexico State Constitution and read it from the preamble through the statement of the intent of government and you will come to understand.  The New Mexico Constitution makes New Mexico sound like it is just a vassal entity for whatever Mordor says it’s going to be.  In other words, they’re perfectly willing to accept the orders and edicts and the style that they’re going to carry on their affairs in.  They’re perfectly willing to be ordered from our elite ruling masters on the East Coast.  If I hadn’t read it for myself, I wouldn’t have believed it, but that’s pretty much what it says.  I don’t know what the circumstances under which they had to say it, but it is an intriguing and fascinating read.

Let’s just pretend that I didn’t read that and New Mexico has this problem.  You’re going to have to get your governor and your legislature and you’re going to have to deal with this.  I think that’s really what ought to be dawning on people.  It is the reliance on Mordor, the reliance on the monster, the leviathan to whisk away all the problems.  [mocking] “It’s their job.”  So what?  If somebody is beating your kid up and it’s the cop’s job to get there, or you think it is, to stop the beating and they’re not there, then you better do something about it or the kid keeps getting beaten.

With the governor of Texas, for whatever reason and whatever his motivations are, leading the way and saying we’re going to send some troops down to the border, I think the next part of that is, in spite of what federal judges are going to do with these acts, is to then construct legislation that gives the states of New Mexico and Arizona and Texas and any other state, the legality and the legal leg to stand on to say: We’ve already voted on this amongst our state and our sovereign citizens and we are not going to let you force us to care for alien friends.

Remember, the distinction between alien friends and alien enemies cannot be blurred.  It must be understood to grasp what the powers are and what the options are that are left with the several states to deal with this.  It may be, folks, those clamoring for a federal solution to this, it may be that the general government of the United States has just become too large, too cumbersome, and it’s an impossibility.  It’s too large of a task for them to deal with.  They may be able to assist, which I think you can constitutionally make a case that they ought to.  If the governors of the states declare emergencies and say that republican rule in jeopardy, then they would assist.  But ceding to them the authority in the first instance, to me, is the fatal mistake.

When you cede authority to someone else to do something that you could probably do yourself better, what usually happens?  You usually wind up doing it yourself.  What’s the old adage?  If you want something done right, do it yourself. So why is it that we think the nincompoops, the absolutely totally inept, inefficacious federal government, we don’t believe that they can execute almost anything properly or successfully?  Why do you think they can do border security?

Mike has been talking about many different ways to deal with the American Union & it’s attack dog, the “Federal” government –There’s Article V & Nullification too

That’s not a knock on border patrol agents.  That is more of a statement of a practical fact.  It seems to me that it’s in the interest of those states that are afflicted by this to move to protect their citizens as the first order of business.  Then, if they cannot do the job themselves, then they would apply and say: Look, we need the federal assistance.  If you do it in that order, well, then, we know who the primary responsibility falls upon. 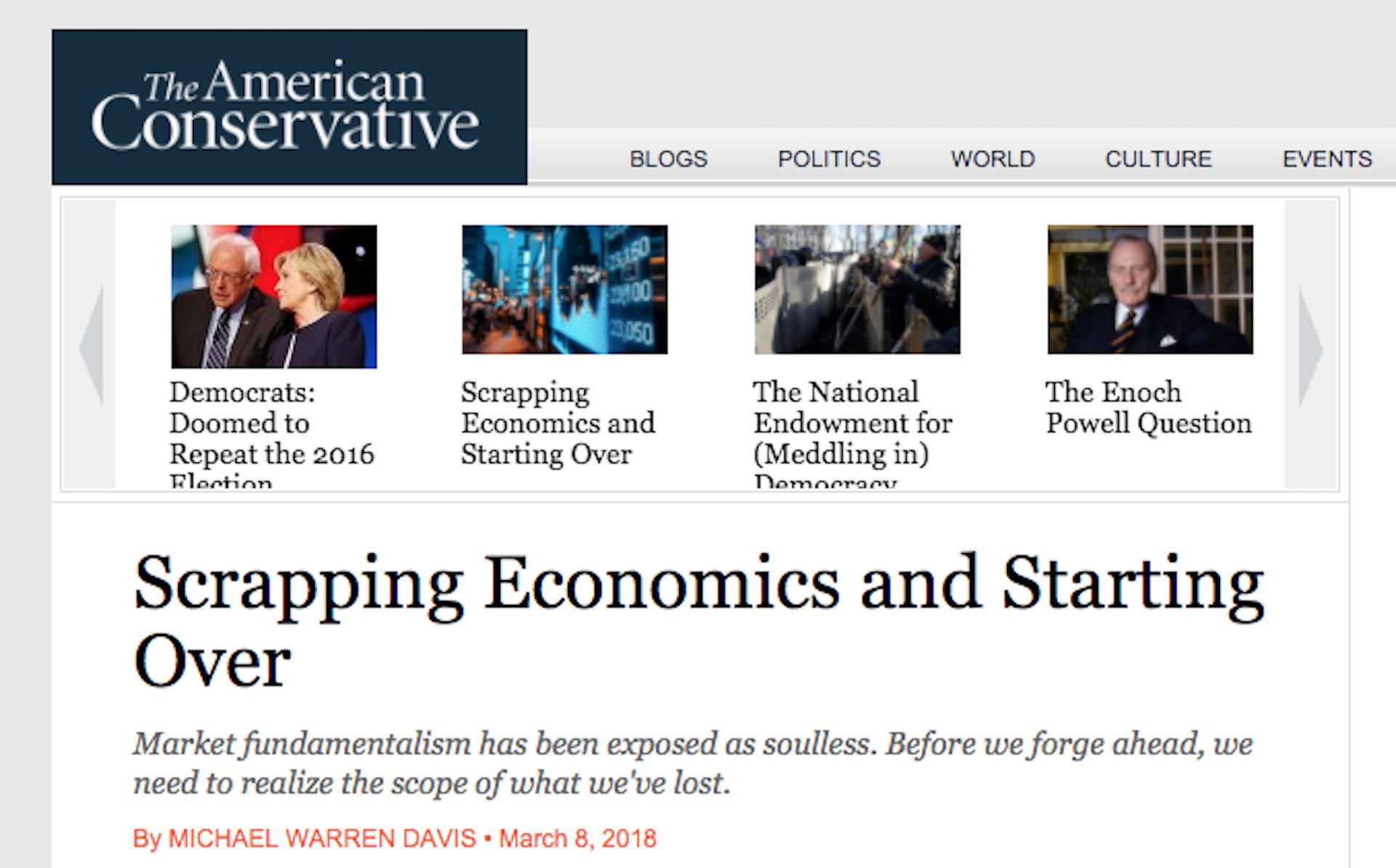 Thursday Pile of Prep – The Coming Economic Revolution of Small