“My Dear Sir, I am free to acknowledge that [the President’s] Powers are full great, and greater than I was disposed to make them. Nor do I believe they would have been so great had not many of the members cast their eyes towards General Washington as President” – Pierce Butler

Americans have recently declared the election of 2012 for the Presidency the”most important election of our lifetimes” and that is just the hype. Without ever considering how one man among 309 millions acquired such enormous powers in what is billed as the “greatest country ever in the history of man” remains a unaddressed peculiarity. The President now has powers the British Monarch would be envious of and the critical citizen, the patriot must enquire from whence these powers did spring and are they legitimate from that source?

Well the source is the Constitution and to support the argument that Executive powers in 2012 are not legitimate we may call on contemporary witnesses at the birth of the Presidency (or Executive as they termed it). Pierce Butler, a delegate to the Federal Convention of 1787 wrote to the Rev. Weedon Butler, a British philanthropist, describing the various differences between the American Constitution (*still to be ratified) and the British Constitution. Butler’s letter informs us that the Framers at the Great Convention committed the convenient mistake of assigning to the Executive powers they trusted to George Washington and by Butler’s own admission, feared in the hands of men of lesser virtue.

(H/T Bill Kaufmann for “Who needs a President anyway?” containing a snippet of the Following letter.)

Mary Villa, May ye 5th. 1788
I am not only much obliged, but much flattered by your opinion of the result of Our Deliberations last Summer, because I had a small hand in the formation. It is a subject that formerly for me I have for some Years past turned my thoughts to; yet still I am sensible I am unequal to the magnitude of it. I therefore previous to the Election declined serving; but as I was Elected I would not refuse going. It is truly an Important Era to the United States; and they now seem sensible of it. The Constitution I think will be agreed to, and be adopted tho’ it has some few opponents.

Where is that work of man that pleases everybody! Pains and attention were not spared to form such a Constitution as woud preserve to the individual as large a share of natural right as coud be left consistent with the good of the whole — to balance the powers of the three Branches, so that no one shoud too greatly perponderate. We had before us all the Ancient and modern Constitutions on record, and none of them was more influential on Our Judgements than the British in Its Original purity. Let you and I compare the two for a moment — yet if I begin I shall tire you. I will be as concise as possible, indeed I am ill able to write at present, and much less to think.

You have a King, House of Lords and House of Commons. We have a President, Senate and House of Representatives. Their powers in some general points are similar; but when we attentively  compare the total of the two Governments, we shall find, I think, a material difference.

In One, the People at large have little to say, and less to do; the other is much more of a popular Government — the whole is Elective.

In the King of G.B. not only all Executive power is lodged, but he is himself also a very important and essential branch of the Legislature.

The President of the United States is the Supreme Executive Officer [in OUR system].

Yet after all, My Dear Sir, I am free to acknowledge that His Powers are full great, and greater than I was disposed to make them. Nor, Entre Nous, do I believe they would have been so great had not many of the members cast their eyes towards General Washington as President; and shaped their Ideas of the Powers to be given to a President, by their opinions of his Virtue. So that the Man, who by his Patriotism and Virtue, Contributed largely to the Emancipation of his Country, may be the Innocent means of its being, when He is lay’d low, oppress’d.

I am free to confess that after all our Endeavours, Our System is little better than matter of Experiment; and that much must depend on the morals and manners of the People at large. It is a large and wide Extended Empire, let then the System be ever so perfect, good Order and Obedience must greatly depend on the Patriotism of the Citizen.

I am not insensible that the Constitution we have Ventured to recommend to the States has its faults; but the Circumstances under which it was framed are some Alleviation of them. It is probable there were Abilities in the Convention to bring forward a more perfect System of Government for a Country better adapted to the reception of it than America ever can be. Was America, or rather the States, more compact It is possible our system woud have been more perfect. Besides our Labours required the unanimous Consent of the States in Convention to Insure success from abroad.

We were therefore in prudence obliged to Accomodate ourselves to Interests not only opposite but in some measure as you observe, Clashing. I will just mention one Object, and that an Important One, in which there appeared a Clashing of Interests — I mean Commerce — When we withdrew from G. Britain the Eastern States were deprived of a benefit they long enjoyd on a large participation of the Carrying Trade; with many other benefits that they had in Common with the British, under your Navigation Laws and wise Commercial System — that lucrative Branch of Trade the fishing on the Banks was neither enlarged nor better secured by withdrawing from Britain.

What then did Our Brethren of the Eastern States gain by a long and bloody contest? Why nothing but the honor of calling themselves Independent States. Let us turn Our Eyes for a moment to the Southern or Staple States, and we shall see how they stood before the War and wherein they have benefited by Independence. While they were Colonies they were in a great measure Confined to One market for the Sale of their Produce — they were restricted to ship in British Bottoms.

By Independence a Variety of markets were thrown open to them — the Ships of every Nation may come into their Ports — thus as Emulation is Created in the Carrying Trade, which of course lowers Freights and raises the Price of Staple Articles — thus Circumstanced we were obliged to Accomodate ourselves to the Interests of the Whole; and Our System shoud be considered as the result of a Spirit of Accomodation, and not as the most perfect System, that under the Circumstances coud be devised by the Convention.

When you consider, my Dear Sir, the Great Extent of Territory, the various Climates & products, the differing manners and, as I before observed, the Contending Commercial Interests, You will agree with me that it required a pretty General Spirit of Accomodation in the members of the Convention to bring forward such a system as would be agreed to and approved of by all. In this light then are You to View the Product of Our Joint Endeavours. The Convention saw, I think justly, the Critical Situation of the United States — Slighted from abroad and totering on the brink of Confusion at home; they therefore thought it wise to bring forward such a system as bid fairest for general approbation and adoption so as to be brought soon into operation.

0Shares
george washingtonPierce ButlerThe ConstitutionThe President
Previous PostEvan Sayet Interview About His Book “KinderGarden of Eden: How the Modern Liberal Thinks”Next PostPile of Prep: The Founding Fathers Would Not Allow the AMT to EXIST Much Less, Survive 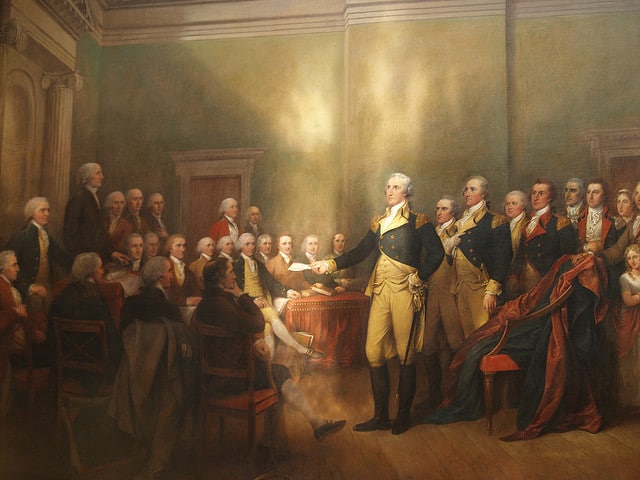