Its Wisdom Wednesday and Swearin’ Joe has locked up the #DNC as I predicted, but can he keep #Killary and Maleficent 1 from the Milwaukee-August Surprise?! Today’s Pile of Prep Feature and the theme of Today’s Mike Church Show!

Veritas et Sapientia – “Of greater interest to me than questions of gerontocracy is Senator Sanders’s victory in the Golden State of California, where I have lived for most of my life, and whose recent political course never fails to horrify me—though, to be fair, the governor-mayor combo of Newsom and Garcetti is hardly worse than my native New York’s offering of Cuomo and di Blasio. Bear in mind that the current Democratic majority in the assembly has presided over a decline which features countless homeless encampments in our major cities, with a concomitant return of rats and typhus. For the past several years, more Americans have left California than have immigrated from the rest of the union.” Sir Charles Coulombe, Crisis Magazine

Hunter Biden Pushes to Skip Court Appearance, Citing Coronavirus and His Pregnant Wife – The Biden’s KNOW the UkraineGate Investigations will ultimately reveal their corruption but this is about defending his DEADBEAT Dad Status

Polish bishops call for more Masses in response to coronavirus: ‘Unimaginable’ to close churches – Not everyone in the Catholic Church has lost their Faith

Folks, fans, friends, Guardian Angel and Patron Saint Augustine: there is a small chance I could be blessed with the opportunity to cover the Trump Campaign’s rollout of “Catholics For Trump” event next Thursday in Milwaukee. SMALL but still a chance! Follow the Twitter story below and if you’re on Twitter, please Retweet, Like etc. I promise to do a good and faithful job in covering the story! God bless and thank you!

I just applied for Press Credentials for the #Catholics For Trump event in Milwaukee, next Thursday, on the Feast of Saint Joseph! Memorare’s & Saint Joseph Protector of All Family’s prayers for this effort are welcome! @realDonaldTrump 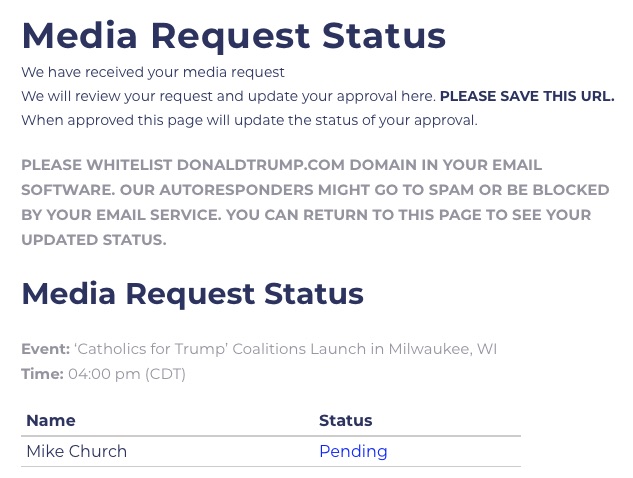 There Is A Difference Between Prudence & Hysteria

Coronaphobia is caused by a society where the enjoyment of life is the supreme value. That is why the full might of the medical establishment must be mobilized with such passion. Everything must be done to prolong the lives of those who still enjoy life and have little thought about the hereafter. Yet not all life is equally valued in today’s hedonistic culture. The same medical establishment that scrambles to treat coronavirus victims snuffs out thousands of lives daily, through abortion and euthanasia, so that others might free themselves from responsibilities and “enjoy” life.

Bingo! 3 weeks ago the same medical professionals in Washington State were busy attending to the euthanasia of the same seniors coronavirus is killing and then heading across town to their favorite Planned Parenthood Clinic to prevent future coronavirus victims from escaping the womb!

Tucker Carlson has had it with ‘Muricans treating the Coronavirus epidemic in ‘Muricah like its not an epidemic, watch.

Bernie Sanders won’t even consider a border closing when the Corona Virus brings on another World War C, watch.

After Int’l Women’s Day, How About Int’l REAL Men’s Day?

The Covid19 Virus has spooked an entire generation of of soy infused effeminate men. Here’s my Twitta on the matter.

#coronavirus Is A Ginormous Thorn In The Side of #SoyBoy, #Gillette, Manbun ‘Muricah That’s Looking For Excuses to Epic Fail Manhood… AGAIN! #MondayMotivation

Margot Cleveland ends her report on the Wednesday  SCTOUS arguments against the Louisiana law that requires abortionists to have admitting privileges at a hospital within 30 miles of the execution site. Margot Clevlenad’s excellent reporting on the oral arguments ends with a downer & prediction of doom that 1 of the 5 “conservative” justices is all that is required to “strike down” our law. True, to a point. Let’s stop appealing to men for this holocaust to end and appeal to God and his Mother, Our Lady and in particular, in Louisiana, Our Lady of Prompt Succor. Let’s ask her to soften the hearts and move the will to action of the five CATHOLICS who will make that decision oh and lest we let her off the hook: the 1 lib “catholic” Sonya Sotomayor! The 5 “conservatives”: Neil Gorsuch, Brett Kavanaugh, Samuel Alito;, John Roberts and Clarence Thomas are all “practicing” Catholics!

I’ve been saying for years that the longer #demoncrats like Charles Schumer of NY, advocate for demonically inspired evil against other humans, which is what abortion & now infanticide is, the more they will logically start thinking like actual demons and reason will begin to fade to be replaced by irrational thought. Well, here you go: watch Schumer, unhinged, make no attempt to veil his threat of retaliation against SCOTUS Justices Kavanaugh and Gorsuch.

I have a message for all you CRUSADER Knights (register to join our confraternity here): THIS is the moment we have been praying, fasting and training for! The enemy is showing itself for the evil we always knew it was; time to double down on our mortifications and appeals to Our Lady to bring this evil to a legal end!