Mandeville, LA – Exclusive Transcript – “What is it that you think they were practicing?  Heresy?  Witchcraft?  What were they practicing?  They were practicing the faith from the first generation from an apostle.  From there it grew.  The liturgy does come out of a tradition, but it comes out of a beautiful tradition, one that is forged and tempered by martyrs.”  Check out today’s transcript for the rest….

We know of but one solution of the difficulty, and that is in religion. There is no foundation for virtue but in religion, and it is only religion that can command the degree of popular virtue and intelligence requisite to insure to popular government the right direction and a wise and just administration. A people without religion, however successful they may be in throwing off old institutions, or in introducing new ones, [Mike: And boy howdy are we good at introducing new one. Look, Pokemon Go. Wee! I digress.] have no power to secure the free, orderly, and wholesome working of any institutions. For the people can bring to the support of institutions only the degree of virtue and intelligence they have; and we need not stop to prove that an infidel people can have very little either of virtue or intelligence, since, in this professedly Christian country, [Mike: Remember, Orestes Brownson is writing this in 1845.] this will and must be conceded us. We shall, therefore, assume, without stopping to assume our assumption, that religion is the power or influence we need to take care of the people, and secure the degree of virtue and intelligence necessary to sustain popular liberty. We say, then, if democracy commits the government to the people to be taken care of, religion is to take care that they take proper care of the government, rightly direct and wisely administer it.

But what religion? It must be a religion which is above the people and controls them, or it will not answer the purpose. If it depends on the people . . .

Mike:  That’s right.  You idiots at that Ninth-Day Adventist down the street, you’ve got it all wrong. You’re reading that verse wrong, you got this wrong.  You don’t have to do any of that.  You didn’t read this one here.  This is the truth.  Two years later: No, no, you guys didn’t read that one there because you didn’t see this one here.  Now this is the truth up in here.

We do not pretend that Protestants say this in just so many words; but this, under the present point of view, is their distinguishing characteristic. What was the assumption of the reformers? [Mike: Of course, he’s referring to Luther.] Was it not that Almighty God had failed to take care of his church, that he had suffered it to become exceedingly corrupt and corrupting, so much so as to have become a very Babylon, [Mike: That’s why Luther’s paper is a discourse on Babylonius] and to have ceased to be his church? Was it not for this reason that they turned reformers, separated themselves from what had been the church, and attempted, with such materials as they could command, to reconstruct the church on its primitive foundation, and after the primitive model? Is not this what they tell us? But if they had believed the Son of Man came to minister and not to be ministered unto, that Almighty God had instituted his religion for the spiritual government of men, and charged himself with the care and maintenance of it, would they ever have dared to take upon themselves the work of reforming it? Would they ever have fancied that either religion or the church could ever need reforming, or, if so, that it could ever be done by human agency? Of course not. They would have taken religion as presented by the church as the standard, submitted to it as the law, and confined themselves to the duty of obedience. It is evident, therefore, from the fact of their assuming to be reformers, that they, consciously or unconsciously, regarded religion as committed to their care, or abandoned to their protection. They were, at least, its guardians, and were to govern it, instead of being governed by it.

Mike:  There you have the long and the short of it.  I’m of no delusion that anyone is going to hear that and do anything other than say, quoting Jeffrey Lebowski: Well, that’s just, like, your opinion, man.  Well, no, actually it’s not my opinion.  It’s Orestes Brownson’s opinion.  All Brownson is doing basically here is repeating – if you’d like to read this, I’ll tell you where you can find it at.  Go read the findings that came out of the Council of Trent.  After Luther and Calvin and all the rest of them had made their case, St. Robert Bellarmine and the Council of Trent answered every single one of the charges that were brought forth, every single one of them.

FOLKS, a message from Mike – The Project 76 features, Church Doctrine videos and everything else on this site are supported by YOU. We have over 70, of my personally designed, written, produced and directed products for sale in the Founders Tradin’ Post, 24/7,  here. You can also support our efforts with a Founders Pass membership granting total access to years of My work for just .23 cents per day. Thanks for 19 years of mike church.com! – Mike

The amazing thing is that most of the answers that came out are not theological.  I keep stressing this when we do an episode of Modern Wrong World Made Right on the controversy over the Roman pontiff.  Bellarmine’s arguments are made from history books.  They’re not made from theologians.  He doesn’t even invoke philosophy even though he was a philosopher.  He didn’t have to.  He goes line by line and, through the extant history, says: No, that’s not the way it happened.  That is, to me, the eye-opening and the most thrilling part of all this, and how it is that truth can be known because it was known by our forbearers.  If the men and women that were martyred by the Romans, that were conducting mass, early forms of the liturgy in catacombs at the time when St. John the Evangelist was still alive and could pass on his liturgy, could pass on his bishopric, could pass it on to Polycarp, and then St. Polycarp can pass it on to Irenaeus.

What is it that you think they were practicing?  Heresy?  Witchcraft?  What were they practicing?  They were practicing the faith from the first generation from an apostle.  From there it grew.  The liturgy does come out of a tradition, but it comes out of a beautiful tradition, one that is forged and tempered by martyrs.  Heads cut off, eyes pulled out, skin ripped off.  Do you think they did that for fun, or that they did it because they didn’t agree?  They knew what they were being martyred for.  This is the point.  When St. Bartholomew got skinned alive, he knew what he was being martyred for.  A singular, solitary Christian church and its preservation, and to the positive faith in it.  When St. Paul had his head cut off, he knew what his head was being cut off for.  The same entity.  When St. Peter was crucified upside down, he knew what he was being crucified for.  When St. Lawrence, the saint we talked about yesterday, was barbecued by the Romans, set on fire, he knew what he was being set on fire.  The list goes on and on and on.

I make this point because, ladies and gentlemen, if you’re not keeping score, if you’re not paying attention to this at home, for heaven’s sake, the Western world is descending at an alarming rate into a paganism not seen since the catacombs, since Constantine consecrated the Romans and made it the Holy Roman Empire.  That’s a long time.  That’s about 1600 years by my count, a little over 1600 years.  We have a Christian civilization today to point to, to go back to because of those early martyrs, because of those early saints, and because, of course, of the teaching left us by Christ, by our Lord.  That’s the point.  That’s Brownson’s point.  You’re regulated by that.  We conform, humiliate ourselves and conform our mind to that reality. 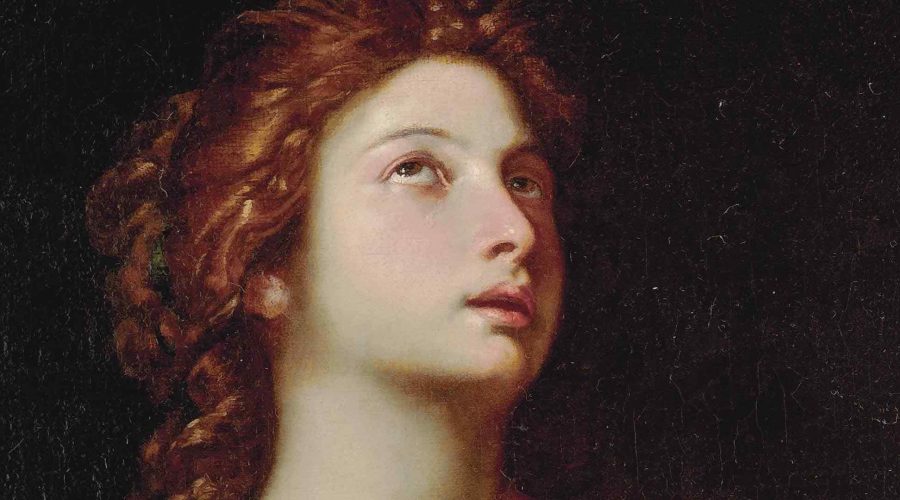