Its Super Tuesday & the stage is set more than ever for a Killary Komeback if Biden fails to stop Grandpa Stalin at the new Alamo in Texas today! Today’s Pile of Prep Feature and the theme of Today’s Mike Church Show!

Jeff Sessions Forced Into Runoff In Alabama Senate Primary – Whether its Sessions or Tommy Tubberville, Doug Jones’ Shampeachment, vote to convict has doomed him in November.

James Comey Endorses Joe Biden, Who Rejects It – Not even arch shyster Creepy Joe can stomach the back stabbing #Killary shill that James Comey is!

Trump Warns “Dems Taking Bernie Out Of Play” After Buttigieg Quits Democratic Presidential Race – The internal panic of the #Demoncrat party is now evidenced by Tom Steyer & The Babadook’s quitting the “race” while party hacks plead for Biden support. 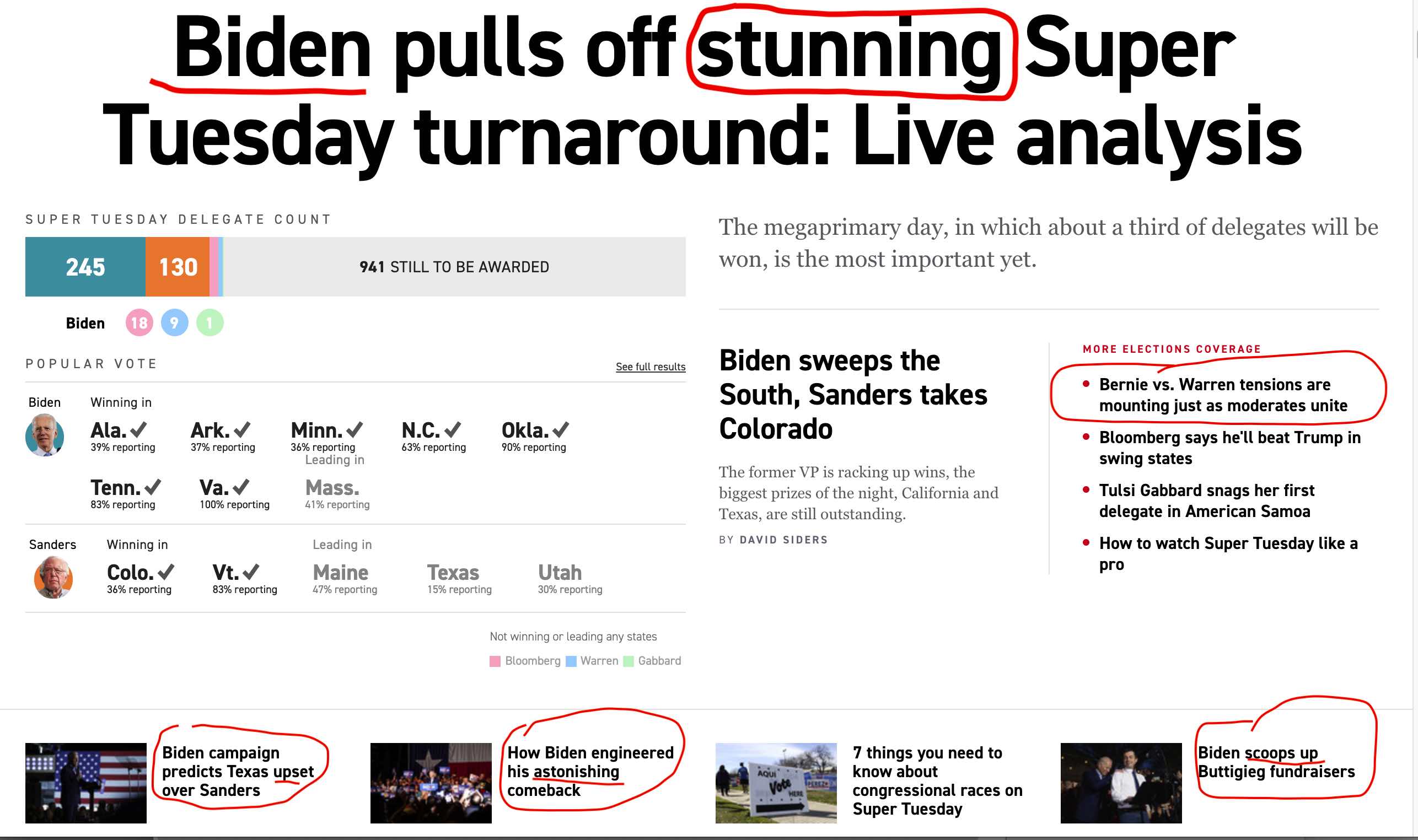 “Joe Biden’s secret identity is exposed: he is actually SuperMan!” blares the headlines, kinda, at politico.com (see today’s pic of the day). Then there’s this from politico a supposed authority on these matters.

This wasn’t a “comeback”, bro, this was a coup. THREE major candidates QUIT 12-24hrs the race before the #SuperTuesday vote, leaving their supporters with the rotten choice of senile, Creepy Joe or Grandpa Stalin. What of the tens of millions in campaign donations that flowed to Buttigieg and Klobuchar explicitly FOR Super Tuesday competition? This shows a couple of things, none portend good things for the future of the #Demoncrat party. 1. ‘Muricans do still cherish their underdogs, Amy & Petey were storybook underdogs who took 10th round dives for party favors and second, Sanders would have unquestionably routed Biden yesterday had Petey and Amy hadn’t abandoned their dreams and very expensive campaigns to crush Bernie. Is a coup like this an admirable act of “loyalty” or  pathetic act of being an accomplice to a hit? I’ll take the latter.

Why isn’t Amazon’s stock tumbling from reports that the company’s sales have plummted 30% in the last week as a result of fears that its imported Chinese chochki’s may be tainted with Corona Virus? TWO Amazon employees are DEAD from the disease

I swear, sometimes I think that The Mike Church Show is playing on loop inside the offices of Crisis Magazine because things that are said on my show, wind up in print, many times verbatim, a few days later. Don’t misunderstand, I am not in the least suggesting anything noxious here, just pointing out that great minds…. oh wait, its Lent! The latest happy coincidence comes from Crisis’ Sean Fitzpatrick.

“The hatred leveled at President Trump is extraordinary—even demonic—as all hatred must be deemed to some extent. Catholics should take good note of this hatred, and also note that all the “right” people hate President Trump—that is, the Left. “The enemy of my enemy is my friend,” as the saying goes, and Catholics should take seriously the call to side against such hatred with the power of their vote.”

Mr. Fitzpatrick’s point is well taken and I agree, but you already knew that.

UkraineGate Has Now Expanded To SoSGate!

The Biden Crime family’s corruption is not only infamous and legendary in Ukraine it looks like the corruption spread back to the State Department of John “Rambo” Kerry. Catherine Herridge reports….

Please understand why I remain so animate by this! This is an active investigation into the dealings of the then VP of USA who has given indications that he sold his influence and power in Ukraine and now it looks as though he may have abused that same power domestically AND he’s STILL running for President!? This is the greatest example we have ever had of the ‘Murican “swamp” government’s, baked in corruption and outright rejection of the Rule of Law to say nothing of epic violations of the trust the citizenry once placed in them. All I can say is “If at First You Don’t Secede, Try, Try Again!”

The Joy of Watching Evil Eat Its Young

I am not the only one noticing the self-destruction of the #Demoncrat Party, it is also been picked up on by columnist Ben Wiker, who writes, in part.

The self-destruction of the Democratic Party is being accomplished so quickly and thoroughly that even Democrats are noticing it. Certainly, the increasing internecine bitterness of Democratic debates is evidence that something is deeply wrong. Part of what attracted them to Trump is their repulsion for the Democrats’ support for everything from abortion, to gay marriage and the transgender insanity. Blue-collar workers have not been indoctrinated at Left-leaning universities. They tend to think that there are only two genders, male and female, and that they should marry each other. They don’t love abortion. They resent being bullied into silence and submission by the politically correct, the thugs of the Left. – [emphasis mine-MC]

I concur and will add that the party has become the hell-on-earth meeting place for the demonically infatuated and they make no attempt to hide it anymore. The prime example of this is the party’s shameless and diabolical refusal to step down from the New Tenochtitlan, human sacrifice temple they’ve built and allow 6 of their senators to cross the aisle and vote to pass a bill protecting children who are born after surviving attempts to kill them in utero i.e. infanticide. Watch Senator Ben Sasse’s correct and fiery denunciation of this evil.

Folks, there is no return from the Rubicon the #demoncrats have now crossed, they are no longer a political party so much as they are an organization charged with carrying out Moloch’s Final Solution in the United States: the end of Man.

Just wait’ll the #demoncrats move their 3 ring infanticide circus to Florida and Grandpa Stalin is made to answer questions like this one, on his unrepentant love for the Castro Regimes.

As someone who’s parents fled Castro’s totalitarian regime for a better life in America, I find it utterly APPALLING that he praised him!

He should be ashamed! pic.twitter.com/P5xZpozVrz

“Conservative” Media Continue Their Elite, #NeverTrump Rejection of Reality At The Expense Of Truth

I used to count the American Conservative Magazine as an ally in the fight against the NeoCon and Soros Elite cabals but surely and steadily, save for the voice of Pat Buchanan, TAC has directed its editorial voices toward full throated #NeverTrump-ism, and now to the point of an abject denial of reality and of the “conservative” mission TAC is supposed to represent. On Friday, we covered the President’s Corporal Work of Mercy in visiting and comforting the paroled prisoners of the NV State Penitentiary and the Hope For Prisoners program.

In using his office to actually PERFORM a Corporal i.e Spiritual Work of Mercy in this prison, The President continues to lead by example as he did… READ THE REST OF MIKE’S ARTICLE HERE!